Sabine Brouillette credits her health team at Edmonton Southside PCN for saving her life. The 67-year-old COPD patient’s breathing was becoming worse. When she was refused treatment at her dentist because of her breathing, she went to see her family doctor, Dr. Colleen Johnston, at Town Centre Family Clinic.

Dr. Johnston referred Sabine to a lung specialist who determined that she needed to be put on oxygen.

“From there, my world just kind of turned upside down. I was really overwhelmed by it all and I kind of went into a dark place. I just got really depressed and my breathing was still getting worse. I went back to the doctor and I asked her if I could talk to someone,” says Sabine.

She was connected with Krystal Davidson, a PCN behavioural health consultant, who works in the clinic.

“I had a long talk with her and she was just so understanding, kind and offered lots of suggestions. She wanted me to go to Breathing for Health but I didn’t want to commit to something when I wasn’t sure. I could barely get out of the house because my breathing was so bad,” she adds.

Breathing for Health is an eight-week breathing rehabilitation program that targets individuals with COPD. Sabine did finally decide to try the workshop and met with respiratory therapists Kirsten Goddard and Colleen Makarowski for an assessment. The workshop was also supported by exercise specialist Tye Babb.

“They were just fabulous. They gave me hope. They talked and listened to me about how I was feeling. So I enrolled and it (the workshop) turned my life around,” says Sabine.

The first session was a challenge for her as she had to carry around her oxygen tank, which took a lot of energy. She was also taught how to breathe properly. By the end of the workshop, she noticed a huge improvement.

“I barely made it around the track three times and I was totally out of breath. At the end I think I did seven minutes, almost did 12 laps and I was hardly out of breath. They were so encouraging and inspiring. It made me really want to try things that I didn’t want to try before. Then I realized I could actually go out with the oxygen tank. I was getting more energy and my depression was lifting,” says Sabine.

She had initially thought that her having an oxygen tank for her COPD was a death sentence. Breathing for Health helped her realize that she can get stronger with exercise, especially walking. Having other people with a similar condition in the workshop showed her that she’s not the only one going through this.

Sabine has had COPD for 10 years and has been a smoker for 40 years. She’s cut down from smoking two packs a day to 20 cigarettes a day.

She’s working on cutting back more and also plans to connect with the primary care dietitian in her clinic. Another form of support has been Marie Andrée Chassé, a PCN Healthy Aging nurse, who provided an assessment of her home for safety and Brendan Klug, a PCN Healthy Aging social worker, who helped her create a free power of attorney and personal directive.

“I didn’t know any of this was available. I was so surprised when I see all the help that is there. I have to sing your praises. You are a great organization and I just wish more people knew about it,” says Sabine. 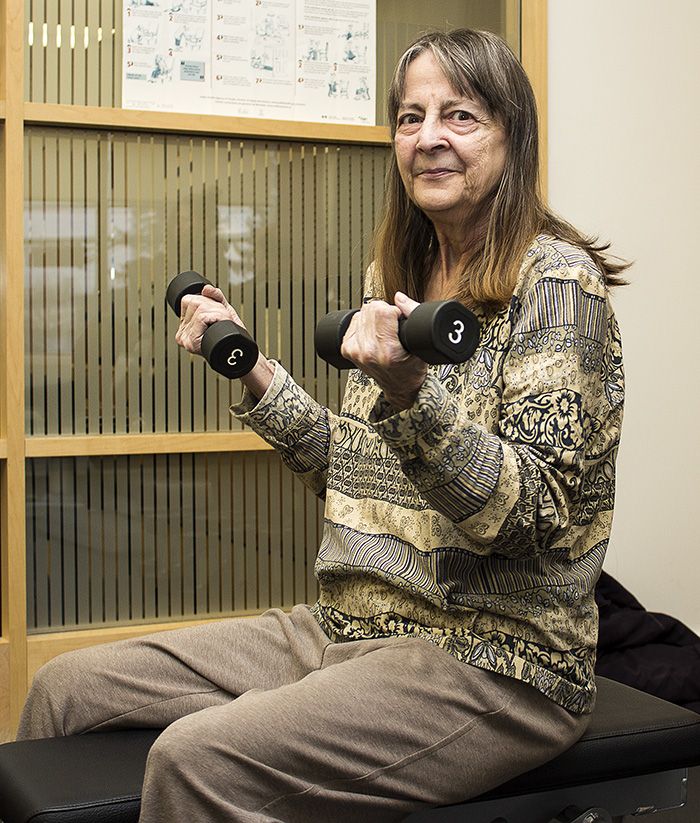