A hospital scare forced Lorraine Henry into a wakeup call about quitting smoking.

In June, Lorraine was feeling extremely tired and had tightness in her chest. She visited her family doctor, Dr. Dennis Wong, had told him she thought she had a sinus infection. She was given antibiotics but her feet and ankles started to swell. Her son suggested that she go to the hospital but she felt she was fine.

Lorraine did eventually ask her son to take her to a hospital. She ended up waking up in ICU at the Grey Nuns’ Community Hospital.

“My blood gas levels were apparently extremely high. They said they had never seen it that high before. My legs were huge,” she says. “I was given another chance in my opinion because I did wake up and I thought I didn’t want to go through that again.”

After her release from the hospital, Lorraine decided to quit smoking by using the patch. The 60-year-old had started smoking at the age of 17 because at the time, her mother and friends were doing the same.

The hospital recommended that she take a breathing rehabilitation workshop since she was diagnosed with COPD. Through Dr. Wong, she was referred to Kirsten Goddard, an Edmonton Southside Primary Care Network respiratory therapist, and learned about Breathing for Health, an eight-week workshop, similar to what the hospital advised.

Her goal was to build up strength in her arms.

“I had gotten to the point where it was difficult to do things with my arms because I would tire out so much. Being able to build up some strength in them and to be able to do more was very interesting to me,” says Lorraine.

During her life, physical activity had not been a priority.

“It wasn’t something I worked towards. I wish I had now, looking back. I didn’t take the time to work it in,” she adds.

Her experience with Breathing for Health has proved positive. She’s noticed a tremendous difference in her endurance for walking and started walking outside.

“It’s not as frightening to go for a walk for three blocks or even go to a mall,” she says.

Her goal is to continue walking even if it means going to a fitness facility to use a track. She wants to keep up her energy and enjoy life. 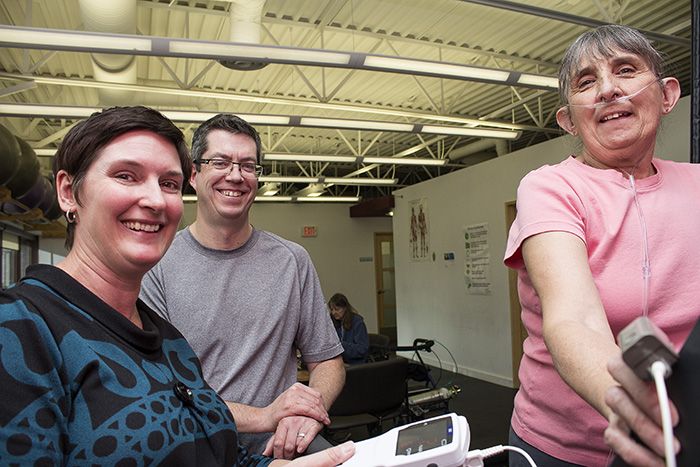