Without exercise, Richard Farruga may have discovered his heart condition too late.

Both Richard and Dezi were doing moderate exercises prior to seeing Sandra Pelchat, the PCN exercise specialist. Richard was sword fighting and Dezi walked when she could.

Richard wanted to support Dezi and joined her and Sandra at the Terwillegar Recreation Centre for a weekly workout.

“I was badly out of shape and I knew it. I needed inspiration to work out so I thought if someone if going to be there and help us, it is a good start,” he says.

Richard started noticing he was having chest pains while exercising and walking and the pain progressively became worse.

“I am fairly active. I was getting more active, doing more exercises, more cardio, keeping my heart working and that kind of saved me,” he says.

He had this concern checked out and it was discovered he had angina with 100 per cent blockage on the back side of his heart. He had two stents put in.

“I should have had a heart attack but I didn’t and I was very lucky that way,” says Richard.

Part of his rehabilitation is cardio exercises and he and Dezi have kept up going to the recreation centre two to three times a week after their appointments with Sandra have ended.

Dezi says she learned how to work around her past injuries and the exercise is helping her control her hypertension and diabetes.

“There was a time that eight stairs were a challenge and now it is up and down. I might go slowly but I go up and down,” says Dezi.

She’s also met with a PCN dietitian to adapt her eating habits for diabetes.

“Becoming a diabetic, I had to figure out what a carb was. To me, a carb was bread, cracker, potatoes, rice and then you come to the realization that fruit and some vegetables are a carb and understand that you have to watch the carb and protein intake,” says Dezi.

She adds if PCN services were not available through her family doctor, she thinks she would have been in worse health.

Sandra was very impressed how the couple have been dedicated to their health.

“Rick and Dezi have worked very hard to improve their fitness over the past year. Despite some hardships, I still run into them regularly at the gym. They’re an inspiration,” she says. 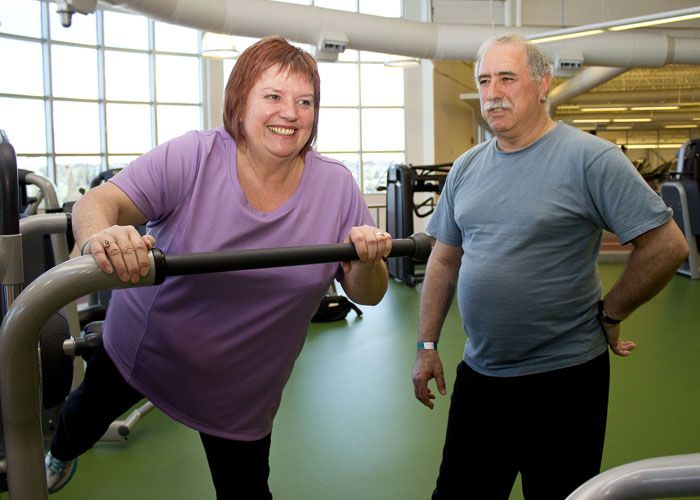