A weight loss journey has turned into a wellness journey for an Edmonton Southside Primary Care Network patient.
Bob Dixon weighed 450 pounds a year ago and decided to cut out fast food from his eating habits. He went to see his family doctor after eight years and was put through a battery of tests.

“I clearly remember the day he came to see me. It was clear that he was ready to pursue positive change in his life, particularly from a health standpoint. Without looking for the ‘quick fix’, we escorted through some appropriate medical testing, offered encouragement and then connected with appropriate PCN resources,” says his physician, Dr. Brian Ritchie.

When Bob met with a primary care nurse, she pointed out that he had lost weight without any exercise and referred him to Moving for Health, a two-month supervised exercise program.

“I knew I had to get out of my comfort zone. The weight had begun to plateau out. I was very sedentary so I started taking this class once a week,” says Bob.

Bob started wearing a pedometer, which raised awareness about how little he was moving.

“I always felt the job I had and the physical things I did over the day were enough. When I came home, I had the tendency to put my feet up and vegetate in front of the TV,” he says.

“Once I started exercising and having more stamina, I went through the day without so much puffing and panting.”
Bob first kept his exercise goals low with 3,000 steps a day and exercising once a week. He began challenging himself after Sandra Pelchat, the PCN exercise specialist, encouraged him to meet her at the Hardisty Recreation Centre.

“The idea of joining a fitness centre and jumping on the machines was an intimidating factor. There was one time I was using the treadmill and then I went right to the bicycle and I thought I was going to die. We are only talking about five minutes of work. I just thought that is good enough,” says Bob.

Sandra gave him a starting point at the gym and he’s made significant progress with his fitness levels since then. He started with 40 pound weights and is now using 90 pounds on fitness machines.

“I consider this very life changing because if it was not for Sandra and her setting me up on that first exercise program, I would not be where I am today and the weight loss I’ve had since January would have stalled long since,” he says.

The biggest change for Bob, 56, is his mindset.

“The idea of being more physically active, taking an exercise program and doing any level of exercise when I first started out was a means to an end. It was to help me lose weight and keep me on track. I have been told by friends that they can tell if I have not gone to the gym because I am crabbier,” he adds.

Dr. Ritchie also has noticed a change in Bob.

“I believe in Bob’s case, meeting the various team members, qualified in their area of expertise, and very importantly offering him non-judgemental support and guidance, has made a big difference. A very good example of the positive impact the PCN can have on an individual’s health,” says Dr. Ritchie.

Bob now works out three times a week and after his routine, he treats himself to swimming laps in the pool. He’s lost 125 pounds and his cholesterol level has dropped from 4.4 to 1.7. 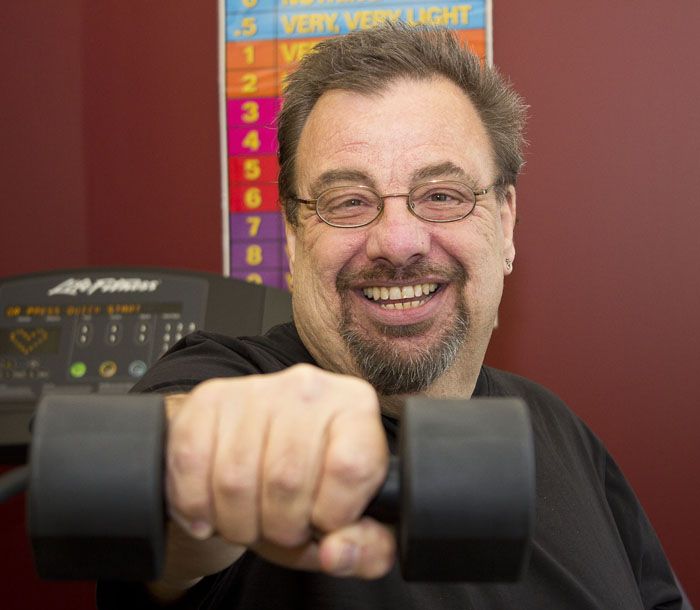