Joyce Hastings turned to Edmonton Southside Primary Care Network for solutions and support while caring for her ailing husband, Irving.

He was diagnosed with a mild cognitive impairment in 2004 and thought he could handle it, says Joyce.
“Irving didn’t want anyone else interfering. He had a plan to cure himself. He was exercising his brain and did yoga,” she explains.

Edmonton Southside’s geriatrics specialist, Shannon Daly, became Joyce’s saving grace when she started visiting the couple in their home in 2005. Joyce was starting to burnout from caring for Irving.

She had been told by the doctor that her husband was too erratic to be left alone. However, Irving became adamant that Joyce had to be at his side all the time.

Shannon’s visits provided Joyce an outlet to discuss the issues surrounding caring for Irving as well as resources such as a PCN social worker to help them set up a personal directive.

“By that time, Irving really got upset if I did anything. He was getting violent and angry. He wouldn’t let me take care of the finances. The social worker managed to get him on track and get the personal directive done,” says Joyce.

By October 2010, Joyce was experiencing stomach pains, caregiver burnout and declining health, resulting in frequent trips to the emergency room. Meanwhile, Irving, 80, was able to hide the fact that he had Alzheimer’s from friends and family.

“He had an amazing way of pulling himself together when someone came. He didn’t act like a person with Alzheimer’s. A lot of the family had no idea. It would last one or two hours. After (a visitor would leave), all hell would break loose,” says the 78-year-old.

“The primary care network was trying to help me but Irving was refusing help. He could feed and dress himself and didn’t wander. He looked healthy. No one saw him when he was violent.”

Joyce remembers calling Shannon on December 31, 2010 and telling her, “I don’t think I could survive the next four days,” as she would not have any family support.

Shannon informed Joyce’s daughter-in-law about what was going on and made arrangements for Joyce to be admitt ed into the Grey Nuns Community Hospital. Irving was told he could not go along and was taken care of by his son and daughter-in-law.

Later Shannon helped the family admit Irving into the Grey Nuns because a sudden decline in his health before he transitioned to long term care.

After Joyce was released from hospital, her health continued to wane. She ended back at Grey Nuns for another two months.

But she points out that she didn’t inform her doctor of her symptoms because she was too busy focusing on Irving’s needs.

“The thing with Alzheimer’s is the caregiver ends up worse than the patient,” adds Joyce.
Shannon continued to visit Joyce and helped her enroll into a PCN caregiver support program as well as the START Medical Day and Psychiatry Day Hospital at the Glenrose Rehabilitation Hospital to help her with physical exercise and the depression she was facing from being apart from Irving.

Joyce says she wouldn’t have been able to manage the past fi ve years without the support from Shannon and Edmonton Southside PCN.

“The primary care network will come and help if you ask them. They know how to navigate the system,” says Joyce. 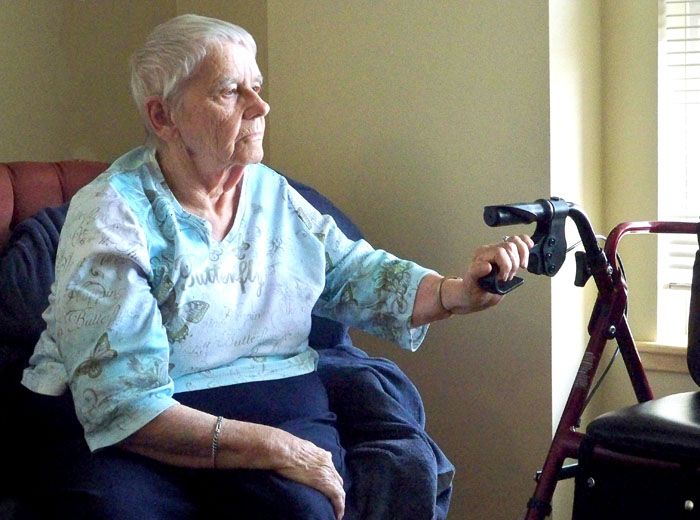